Pipebursting uses systems that break the existing pipe structure, expand the size of the void created to enabling the replacement pipe to be inserted into it. This can be achieved in one of three ways: 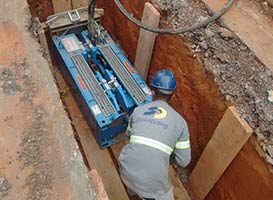 The following should be noted in relation to the operation of this system:

This system operates best in compressible soils such as soft clays. Hard clays and dry well graded sands pose the most challenging conditions as these soils are much more difficult to displace.
The pipe to be replaced should be constructed of a brittle material such as cast iron, vitrified clay, unreinforced concrete, asbestos cement etc. Pipes made from ductile materials such as steel or ductile iron can be replaced but special pipe splitting equipment is required which is detailed below.
It should be noted that there is the potential for the broken shards of the existing pipe to be orientated so that they are not fully pushed into the surrounding ground and any sharp protruding edge or point can cause surface scoring on the outer circumference of the replacement pipe. This is a particular problem when a semi-rigid pipe such as those manufactured in polyethylene are selected as the replacement pipe. Care should be taken in selecting the SDR rating of the replacement PE pipe to ensure that it has adequate wall thickness to operate at its design pressure rating should any minor surface scoring occur during installation. Polyethylene pipes with a hardened outer skin are available which can be used to help overcome this potential problem. 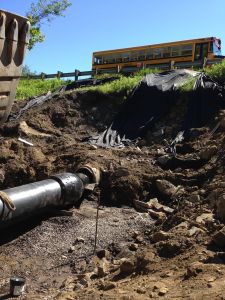 Static Pipebursting utilises a hydraulically powered push/pull rig that can advance and retract metal rods through the existing pipe applying significant tonnage to the rods as they are retracted. The pipebursting rig is set up in a launch access pit or manhole (smaller machines are available to suit this latter application). The replacement process commences with the rig used in push mode to introduce a string of steel rods inside the pipeline to be replaced. Once the reception point has been reached, the bursting head, which is a static steel expander cone, is fixed to the lead rod.

The replacement pipe is then attached to the bursting head and the rods are drawn back to the launch point with the rig in pull mode. This action fragments the existing pipe, pushes the shards into the surroundings ground, creates the required void and simultaneously installs the new pipe. The previously prepared new pipe string which is usually a polyethylene pipe is attached to the bursting head via a swivel. Once the bursting head arrives at the launch pit the assembly is removed and the new pipe is in position and ready to be connected to the rest of the network.

As with Dynamic Pipebursting there may be interaction between the broken shards of the old pipe and the replacement pipe so similar precautions should be taken when selecting the new pipe.
Repair collars that may be in place on the existing pipe can cause a problem as they are usually not made of a brittle material that the bursting head can fracture. However, the bursting head can be designed so that it incorporates cutting blades that will allow these potential obstacles to be overcome. They are designed to cut through these collars rather than break and fracture them, eliminating the threat.
Another form of Static Pipebursting is the use of a cable-based system. Here instead of using bursting rods to apply the bursting force when pulling back a bursting head a wire cable is used. These systems are normally used on small diameter pipes over relatively short distances and they have the following advantages over other rigs:

The operation of this system is very similar to that of rod based systems.

Expansion Shell Pipebursting utilises a specially designed machine which is usually hydraulically powered to provide lateral bursting power, but they have no forward motive power.

The unit must be winched through the existing pipe to allow it to be used to complete the pipe replacement. This system is not favoured for replacing long lengths of small diameter pipes as it is far more time consuming than the dynamic or static pipe bursting systems. Its main application is for sewer replacement as due to the bursting heads short length it can be introduced into the existing pipeline via existing manholes eliminating the need for expensive deep access excavations.
For the operation, a winch cable is passed from the reception point through the existing pipe to the launch access pit or manhole. The expansion shell bursting head is attached to this cable and placed inside the existing pipe. The new pipes which are normally short length with integrated push fit joints are attached to the rear of the expansion shell unit.

A hydraulically-powered pushing unit is used to push the replacement pipes behind the expansion shell unit as it advances. A tensioning system can be used to ensure that the replacement pipe joints remain intact during the replacement process. The expansion shell equipment is pulled into the pipe and the short distance that it is moved into the pipe is a function of its length. The hydraulic mechanism within the bursting head is activated and this causes the shell to expand. This expansion exerts significant lateral force onto the old pipe which fractures and fragments it and pushes the shard into the surrounding ground. The shell is then retracted to its normal position and winched further into the existing pipe by a distance that is equivalent to the length of the shell bursting head and the process is repeated. This procedure is continued over the full length of existing pipeline being replaced until the shell bursting head reaches the winch access pit. The shell bursting head is then removed leaving the new pipe in place ready to be restored to service.
Careful consideration of the ground conditions should be made before selecting this system with the short length pipe option as the following problems can occur:

Again, as with Dynamic and Static pipebursting, there may be interaction between the broken shards of the old pipe and the new pipe so similar precautions should be taken when selecting the new pipe.

Pipe Bursting
Pipe Splitting
Pipe Eating and Reaming
Pipe Extraction
Live Mains Insertion
Our website uses cookies from third party services to improve your browsing experience. Read more about this and how you can control cookies by clicking "Privacy Preferences".