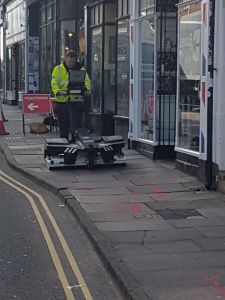 Where the potential buried service or underground obstacle is not current-carrying nor capable of having a signal artificially generated along it, another option is necessary to establish the route and depth profile. One option for this is Ground Penetrating Radar or GPR.
GPR is an advanced, non-invasive sub-surface imaging technique that typically uses short pulses of electromagnetic energy to look into the underground. GPR can detect through soil, concrete, tarmac, rock, wood, ice and even water. It is quick, easy to use and inexpensive in comparison with other investigation methods. It is capable of probing down to a few tens of metres (depending on the system type & ground conditions) and provides the user with a cross-sectional image of the sub-surface.

By selecting the correct frequency GPR is very good at determining the shape, size, extent and depth of a buried object. Higher frequency antennae tend to penetrate less deeply but can define near-surface objects better. 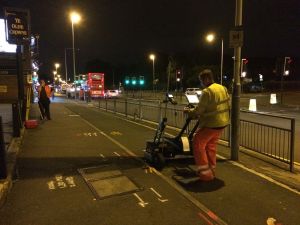 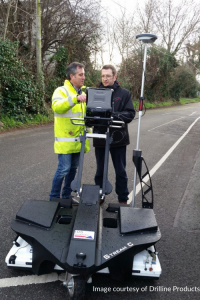 As the GPR system is moved over the surface, pulses of electromagnetic energy are directed into the ground from a transmitting antenna. The energy travels though the ground where buried objects reflect/scatter part of the energy back to the surface, which is picked up by the GPR’s receiving antenna. These returning signals are converted in to a GPR section (or radargram) which is displayed on a computer screen in real-time. The trained operator or sometimes a specially trained data analyst then uses knowledge, skill and experience to assess the data and interpret the features seen in the section.
This data may then be presented in different forms using software packages to display the results of the survey so that the client can interpret and understand the results.
There are however regulations as to how and where GPR may be used due to the radio emissions, so any operator or end-user needs to be fully aware of these.
Several types of GPR equipment are available including single antenna, multiple antenna, walk-behind/push trolley and ride-on systems. Each has its position in the market and the selection of equipment will depend on the scale, range and type of survey that is to be undertaken.
The majority of systems are used in a format known as ‘ground-coupled’ which means that the antenna is in contact with the surface of the ground (more or less).
Air launched GPR is also used; the antennae are mounted on a framework that does not bring them into contact with the ground surface, or mounted on airborne transport, for example a drone. However current regulations do not allow air launched GPR to be use without specific permission from local regulatory authorities – this includes drone mounted systems.