Steve Vick International’s Contract Service team recently gifted their time and resources to assist The Friends of Gedling Country Park, (FGCP) in Nottingham, on a project to install an overspill tank.

The FGCP had an issue with reeds clogging up one of their ponds and despite numerous attempts to clear the reeds, they rapidly grew back.  When considering their options, research indicated that reed growth is arrested where the water level is at least 90cm deep.  They therefore experimented by building a weir at the outlet to deepen the water. This proved to be successful, and the reeds did not regrow, but the weir did not retain the water effectively enough and leakage occurred through the stony ground underneath.

The solution was to position an overspill tank in the pond, 4 metres from the bank, with a new pipe connected 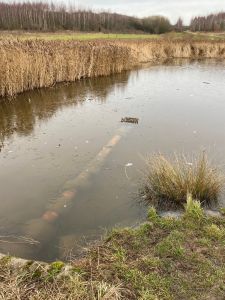 to the existing outlet pipe. It was this connection that the Steve Vick team were able to assist with.  Using SVI’s Endseal expanding foam sealant technique, more commonly used in the Gas Industry to give a permanent seal on inserted mains, the team were able to make a successful connection between the host pipe from the lagoon to the newly laid inserted pipe from the overspill tank.  This prevented water ingress into the annular space and therefore eliminated potential leakage.

As the new tank is directly connected to the lagoon outlet pipe, the water flowing out of the lagoon will now bypass the leaks.  Overspill outlets such as these are often used on large reservoirs like the Ladybower Reservoir in the Peak District.

The FGCP considered other solutions, one of which was excavating into the bed of the pond, near the outlet where the leak was occurring, and laying a concrete base.  However, this came with risks as it would be an expensive exercise to undertake and there was no guarantee it would effectively achieve a seal.  Using the Steve Vick International Endseal Technology, which is proven in the gas industry to prevent gas leaks offered the ideal solution. 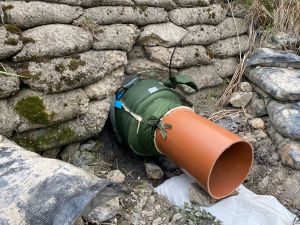 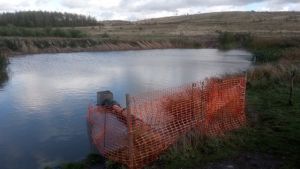