Hydrotech were awarded the contract to replace circa 3,500m of trunk main across Plaitford Common and Canada Common in the New Forest.  Initially they looked to use open cut and replace the main in its entirety but after further consultation with the New Forest and a team of specialist ecologists, it was decided that sliplining 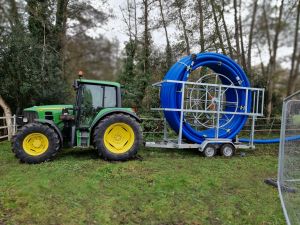 would be the preferred method as it would cause less disruption to the area classified as a SSSI, SPA & RAMSAR site.

The old 200mm PVC trunk main required sliplining with 180mm PE.  Hydrotech were given areas of the common whereby excavation was not permitted and as a result required bespoke pipe coils upto 175m to mitigate the environmental risk. Working alongside Westwood Pipelines Limited (PE pipe manufacturers) they were able to obtain bespoke coils upto and including 175m of 180mm PE.

Hydrotech then needed to find a wWay to transport the bespoke coils, it was at this point they contacted Steve Vick International. 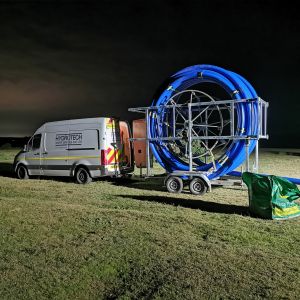 Seb, Project Manager at Hydrotech, liaised with the SVI Design and Development team and asked if the SVI 180mm Pipe Coil Trailer could be modified to take 175m coils.  Having designed and built these trailers back in the 70’s, the SVI team were well equipped to know the capabilities of the trailers and were able to very quickly come up with an engineering solution.  The trailer was modified by widening and strengthening the carousel to accommodate the larger coil, this carousel is fitted to all SVI trailers to aid dispensing of pipe onsite. 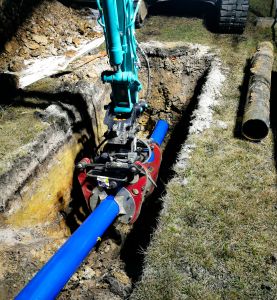 “During the early stages of the planning process I realised that if we could use bespoke coils of 180mm PE rather than sticks, it would be far more efficient for this project and allow us to mitigate the areas of environmental no-dig.  The issue I had is that I couldn’t find a trailer that would accommodate the size of coils I needed.  It was at this point that I contacted Steve Vick International to see if they could help.  They have been absolutely brilliant from start to finish and both their modified 180 trailer and their pipe handlers have been key to the success of this project.”