Drainage and wastewater specialist Lanes Group plc has installed one of its largest diameter ultraviolet liners to date to strengthen a sewer on the site of the new HS2 railway station in Birmingham.
The brick-lined sewer, which is 1460mm high and 820mm wide, is due to end up beneath what will become the second city’s new Curzon Street HS2 Station.
The Lanes sewer rehabilitation and lining division was given the task of lining the egg-shaped sewer so it had the strength to withstand building work and the weight of the new station above it.
Based on specifications provided by main contractor Murphy, Lanes worked with German liner manufacturer IMPREG to design a liner than would fit the sewer and provide the structural strength needed.
The outcome was the production of a liner that was 21.6mm thick, one of the thickest Lanes has installed, and weighing 168kg per metre, giving an overall weight of 6.5 tonnes.
Lanes lining project manager Gary Carey, who led the eight-person team that installed the liner, said: “The thickness and 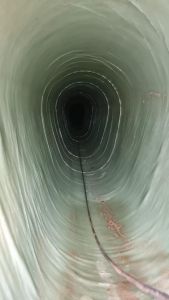 dimensions of the liner added to the challenges for this project.
“Also, because the new HS2 station will be built over the sewer, we were required to carry out a particularly stringent series of strength tests on the liner, before and after installation.
“It is very likely that many other culverts and sewers will have to be strengthened as the HS2 build-phase gets underway.
“Lining these structures is much more sustainable and less costly than replacing them, and we’re pleased we’ve demonstrated the capability of our technology and our teams with this early project.”
Murphy first had to provide Lanes with access to the sewer, buried five metres below ground. This was achieved by installing two chambers at either end of the section being lined.
The liner was brought to the site in central Birmingham directly from IMPREG’s factory in Germany, transported in a refrigerated lorry to prevent the resins in it hardening before it could be installed.
The liner was then unloaded along a specialist conveyor, pulled into the sewer with a 10-tonne electric winch, and inflated with compressed air.
Lanes’ jumbo core UV light train – its 12 bulbs generating 12,000 watts of UV power – was pulled through the liner to trigger the catalysts that cured layers of resin in the liner. 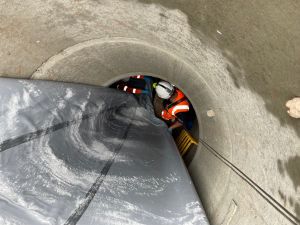 The computer-controlled process took 2.5 hours to complete. Because the liner was so thick, heat from the UV lamps also contributed to the curing process. The liner could then be trimmed and grouted into place.
Samples of the installed liner were then taken and sent for laboratory analysis to confirm that it met the performance criteria required by Murphy and HS2 structural engineers, to provide a design life of 100 years.
Lanes is one of the UK’s leading cured in place pipe (CIPP) lining specialists. Its UV CIPP systems can be used to line pipes with diameters up to 1600mm. Larger pipes can be lined with specialist equipment.
UV lining is one of the most sustainable ways to rehabilitate pipes. Liners can be installed in shorter time periods than with other CIPP techniques and in more constrained spaces, with less energy and waste.
Curzon Street Station will be the northern terminus of phase 1 of HS2, linking Birmingham with Euston Station in London.
The high speed rail line is due to open in 2026, with an expected nine train arrivals and departures every hour.
The trains will reach speeds of up to 226 miles per hour, cutting journey times between London and Birmingham from the current 1 hour 21 minutes to 52 minutes. 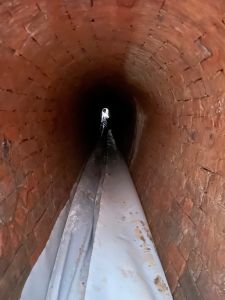