Established 1984 and now part of the Cappagh Group of Companies, Allen Watson Limited is one of the country’s leading specialist No-Dig trenchless contractor’s providing solution to a wide range of engineering challenges with a strong client base and excellent reputation.

The company was recently engaged on a project in southern England for the M27 J4 to J11 Smart Motorway Project for a Sewer Diversion at Gantry GY82 for which Southern Water was the client. The work involved a crossing beneath the M27 motorway at Eastleigh near Southampton, UK.

The Consulting Engineer for the works was Robert Walpole and Partners with Cappagh Browne Utilities Limited being appointed as the main contractor.

The project was required because an existing sewer passing under the M27 had become filled with concrete during a vertical bore piling operation. This concrete prevented any insitu repair options being viable.  It was therefore decided that a trenchless bored project was required to install a new replacement sewer parallel to original pipeline under the motorway which could then be connected back into existing manholes on either side of the motorway. Allen Watson was appointed to undertake this installation.

Ground investigation boreholes were drilled at the drive and reception shaft locations which showed potential for Alluvial Deposits and/or Wittering formation (which is usually described as a Greyish brown laminated clay), wavy- to lenticular-bedded sand interbedded with clay in equal proportions and fine- to medium-grained sparsely glauconitic sand over a London Clay Formation. Water strikes indicate groundwater might also be present in the bore face.

Given the ground conditions and the length of drive involved, at 120 m, that a guided auger bore technique was most appropriate to achieve an accurate line and gradient for tying the new pipeline back in to existing levels. This was also coupled with the limited working area available for the new pipe installation. To complicate matters the alignment of the new replacement sewer had to pass through a restricted opening between the newly installed piles and existing piles while running parallel to and avoiding the existing damaged pipeline. Therefore, precise alignment was essential. This was one of the main reasons why Allen Watson opted to use its specialist Guided Auger system.

System used was a specially manufactured Guided Auger Bore built to Allen Watson Limited’s specification, allowing the boundaries of this technology to be extended within the prevailing difficult ground conditions. For the M27 crossing the 120 m long pilot bore was driven using Allen Watson’s GAB155v. Once completed and with the heavy wet swelling clay conditions experienced along the route, this machine was demobilised and replaced with Allen Watson’s American Auger 36/600 to directly install the sacrificial 610 mm diameter steel sleeve casing.

The works were initially designed as a one bore installation, installing 610 mm o.d. steel casing over 120 m in one continuous length. However, whilst on site the contractor was asked to undertake a further separate 12 m long bore. Initially designed as Timber Heading this option was soon abandoned by the main contractor due to the arduous ground conditions being encountered. This meant that an additional guided auger bore installation was to be undertaken by Allen Watson to complete this section. This in turn meant that the original Guided Auger Bore reception pit had to be converted to enable it to accept one of Allen Watson’s compact boring machines to complete this short run to tie the new replacement pipe back into the existing pipe network.

Prior to commencing completing the final design and commencing work two additional boreholes were sunk to reinforce the decision that the boring method selection was the correct one. These ground investigation boreholes were drilled at the proposed drive and reception shaft locations.

Once the bores were completed and the casing pipes were in place, the final product pipe was installed within the 610 mm o.d. sacrificial steel sleeve. This was a 450 mm i.d. SN8 Ridgisewer drain pipe.

This sewer pipe was held in position within the steel sleeve casing by specially designed and manufactured EPDM centralising bushes that had been fabricated specifically to suit the steel sleeve internal diameter and the new sewer outside diameter. The special EPDM centralising bushes that had been successfully used on previous Allen Watson projects were manufactured and fitted to allow full annulus grout flow, giving a fully grouted support finish to the sewer pipe within the sacrificial steel sleeve.

The ground conditions at the site presented various challenges to the installation crew. During the pilot tube installation, injection of a polymer-based drilling fluid allowed the torque and thrust pressures on the boring machine to be maintained at suitable levels while overcoming the ground reactions from the highly swelling clays.

Equally, the conditions proved challenging during the auger boring process that followed. While these conditions were expected the experience, the correct choice of equipment and methodology used by Allen Watson allowed for these conditions to be successfully overcome.

One of the specific stipulations of the project was that the method should avoid all disruption to traffic using M27 motorway above whilst keeping below permitted heave and settlement predications at surface.

Stuart Baldwin Head of Planned Works for Cappagh Browne Utilities Limited stated: “The project to replace the damaged 600 mm diameter sewer under the M27 was especially challenging. Excellent collaboration between Southern Water, CBUL, Cappagh Construction, Allen Watson Ltd and various stake holders was a key to its success. Utilising the specialist techniques and skills available within our parent and sibling companies and the persistence from the Cappagh Construction team and the Allen Watson Ltd drilling team, enabled this extended drive to be completed without disruption to the busy M27 carriageway.”

Allen Watson’s Operations Manager was site-based throughout the project to provide support to the specialist auger team if needed. The operations manager stated that: “Based on the pressure readings gained from the pilot installation and those taken as the drive passed under the M27, the 120 m length crossing was initially planned utilising Allen Watson’s GAB155v machine. However, the high torque experienced during pilot bore was such that it made sense to switch to the contingency equipment after the pilot bore for the 610 mm sleeve installation operation to avoid any downtime should pressures increase further.”

Commenting on the project for Allen Watson, Simon Marsh, Project Manager said: “There were some very tight alignment challenges on this project with the route of the new pipeline having to pass through a corridor that was just 1 m wide to avoid existing piles, and this whilst maintaining the required gradient of 1 in 120 with an exacting tolerance over the 120 m length. The ground conditions, consisting of swelling clays, were encountered during the pilot bore installation process. The challenges this presented were increased by the exceptionally long length of the crossing.”

Ultimately the project was a success across the board with the new sewer installed, no disruption to M27 traffic and a satisfied client. 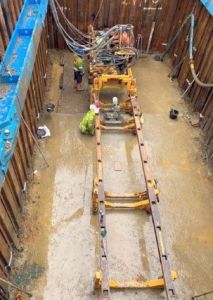 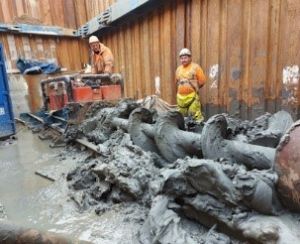 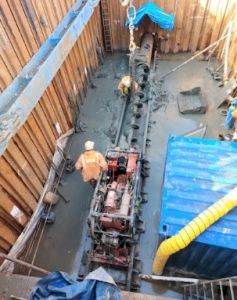 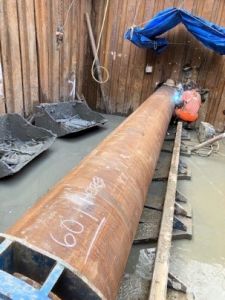 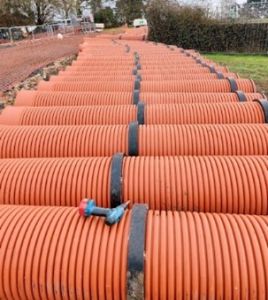 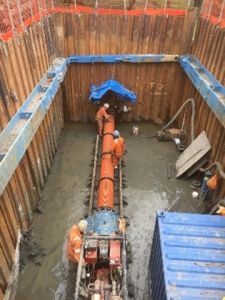 Installing the Ridgisewer pipe into the steel casing