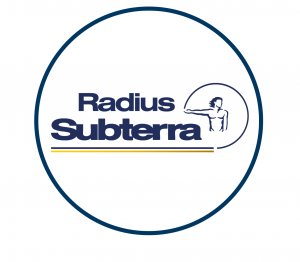 The Didcot Rolldown operation was part of a mains relining scheme, in which Radius Subterra used their Rolldown® close-fit lining technology.

The main needing to be relined – a 12 inch cast iron medium pressure gas main – was on the outskirts of Didcot, Oxfordshire, in what is currently a rural location in the process of being developed into a large housing estate. The length to be lined was a total of 960 metres! This main had a recent burst history, with 40 metres having already been replaced. 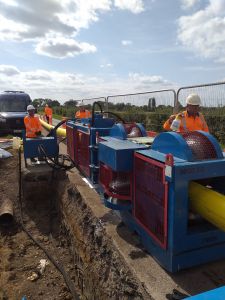 Systems via our framework agreement. The Radius Subterra lining technology was more cost-effective than replacing the ageing pipeline using the open-cut installation technique. Rolldown® is a concentric reduction pipe lining system ideal for the protective lining of new pipes, or for the rehabilitation of structurally weakened or corroded pipelines and mains.

Radius Subterra were called upon to clean the host main and insert the liner, after carrying out the diameter reduction, followed by reversion and pressure testing.A ground-breaking no-dig pipeline replacement technique, Rolldown® uses fully structural or interactive close-fit polyethylene liners for the rehabilitation and protection of ageing pipelines. First, the polyethylene pipe is pushed through a set of rollers to concentrically reduce its diameter by around 10% for easy insertion into the host main. Once inserted, the PE 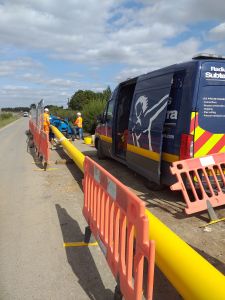 pipe is pressurised to revert it to its original diameter, forming a close-fit inside the main. This particular project, managed by John Williams from our Hilcote Office, was undertaken for the local gas distribution network.

The Radius Subterra Team Leader Graham Lockett was supported by Stephen Bain and a three-man team from White Utilities Ltd; the Subterra element of work commenced on Sept 1st, taking three weeks to complete. ‘We’re happy to say that the project is now finished and the main re-commissioned! Our customer was very happy with the outcome and are currently looking at other similar projects where Rolldown can be used, in the near future.’