At Düsseldorf Airport, Germany’s third-largest airport, the stormwater pipe system is more than 100km long and as complex as the infrastructure of a small town. The network is regularly inspected and evaluated.

With a changing climate and frequent heavy rainfall, regular assessment becomes increasingly important. “Our airport absolutely needs a modern rainwater drainage system. Without regular inspections and rehabilitation works, the security of airport operations would be at risk”, says Boris Opolka, who is responsible for sewer operations and renovation at Düsseldorf Airport.

The airport’s drainage system includes three main pipelines, the largest of which is called “RW Sammler Mitte” (“stormwater collector centre”). It drains large parts of the airport’s apron, taxiways, and runways, as well as the terminal roofs. Built in the 1960s, the collector has been in continuous trouble-free operation for 60 years. To maintain and futureproof its structural capacity and leak-tightness, it was decided to rehabilitate the pipeline in 2019, with sections directly below the runways requiring special attention due to the heavy aircraft loadings.

The contractor Aarsleff Rohrsanierung GmbH were appointed to reline the existing concrete system with Flowtite GRP pipes. Tested and approved by the German Railway for usage under rail tracks, the pipes handle loads and vibrations very well, and these properties are similarly important for airport applications. Thanks to the relatively thin yet extremely stiff pipe walls, the diameter loss is minimal, and the collector’s capacity has been hardly affected. In addition, the material is very durable and, light weight, making it easy to install; a significant deciding factor given the project’s challenges.

A condition of the contract was that the flight schedule for the airport could not be affected, so the works had to take place after all daily operations were completed and before recommencement the following day. The nightshift window was between 11.30pm and 5am and all deliveries had to be coordinated in accordance with the airport’s strict security procedures. 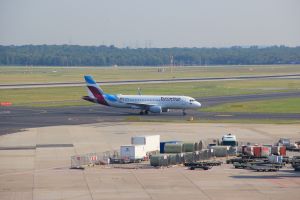