Jet Aire Services has been praised for playing a key role in ensuring dozens of homes avoided being flooded during last week’s downpours.

Our crews worked round the clock last Tuesday and Wednesday when large parts of the North East were affected by heavy rainfall.

We received more than 70 emergency calls in the space of a few hours, but our reaction to one particular call-out in Middlesbrough has earned praise from our partners at Northumbrian Water.

And while the crews who attended the incident have been given a pat on the back, the support team back in the office have also been praised for the way they dealt with making immediate changes to planning to avoid any flooding at the properties.

In an email to our Senior Management Team, John Tait, Technical Support Advisor for Northumbrian Water, said: “Could I just pass on thanks on behalf of myself and my colleague John Knowles who had jointly attended a confirmed external flooding incident at a property in Middlesbrough. 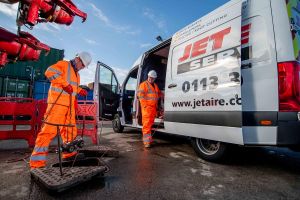 been for the swift actions and willingness of both ESH and Jet Aire to quickly adjust their busy planning schedule to divert resources to site.

“From the initial attendance by the Jet Van crew member, who quickly identified a major issue within a large diameter surface water sewer serving a development of 24 bungalows, Jet Aire arranged vactor attendance.

“This was during a very busy period where we were experiencing high demand due to inclement weather both on the day and had been throughout the week.

“The team were able to draw down the system, which comprised of approximately 80m of 225mm sewer, to negate the risk of further flooding. This swift action quickly allowed us to identify that the sewer was blocked with hardened concrete type materials affecting 60.0m of sewer, with a loss of service of up to 95% at some points, with the remaining capacity reduced by up to 60%.

“The next working day, again both ESH and Jet Aire moved around their works schedules to allow resources to be diverted back to the location, from which point the crews worked in difficult conditions whilst always providing the best possible customer service.

“This even meant stopping what they were doing and making the site accessible to pedestrians/vehicles if these needed to be in or out of the cul-de-sac.

“This work was exhausting for the crews on site and their extremely hard work and determination to get the job done, whilst still working to the highest safety measures, has prevented the need for 60.0m of 225mm sewer, laid at a depth of up to 2.6m, to be open cut excavated and re-laid.

“Had this been required the work would have stretched over several weeks, resulted in large scale disruption to residents which would have undoubtedly led to complaints and would have resulted in a very high financial cost to NWL.”