Working for a contractor, Plowman Craven’s utilities team was asked to find the line and level of a 90m culvert that ran under a road so that connections could be made from a new housing development in Macclesfield.
Using our state-of-the-art gyroscopic mapping system, we were able to successfully locate both the 600mm and 800mm sewer pipes at a depth of 15m – despite the many challenges of dense vegetation and dangerous access – and deliver a details report to the client.

A Challenging Project
The key challenges of this project were access and depth. One access point was in a cemetery, down an embankment and in amongst all the trees. The second one was over the road behind the car park of a bowling green. It was also down an embankment, with steep access. Both were covered in thick vegetation making it very difficult to establish accurate control and coordinates in the positions that were needed.
Following an initial site recce, a scaffold around the dangerous entry to the chamber in the bowling green end was requested. We also did a recce of the chambers themselves to make sure they were safe to access and quickly found that the one in the bowling green area had subsided, leaving a 45-degree slope down the shaft that you effectively had to slide down. It was immediately deemed unsafe so we had to find an alternative way of surveying it.

Enter the Gyro
With the sewers running at a depth of 15m underground, locating the pipes was well beyond the reach of most of the equipment we would normally use.

It was way too deep for ground penetrating radar (GPR), and we knew that CAT and Genny would not pick it up. Although a sonde can work at 10-12m, we were aware that the signal would bleed into all the other utilities above it. The sonde also would not provide a truly accurate location as you would never know where it is sitting in the pipe.
That’s where the gyro system is so good, as it’s possible to input the diameter of the pipe. It also calculates its own position within it. For pipes of this diameter and depth, the gyro is really the only way. Capturing such accurate survey data also makes it possible to produce 3D models.

Innovation in Action
Our expert team soon came up with a solution, connecting the crawler camera to our gyroscopic system to push and pull it along. Thankfully this task was made easier because the sewers had been jet-washed and cleaned prior to our attending site – which also gave us important information about which wheel sets would be best to ensure the gyro wouldn’t get stuck.
To ensure accuracy, we also undertook an additional topographical survey, setting up control with millimetre accuracy, observing kerb lines, boundary lines, vegetation lines, manhole locations and culvert locations to ensure we were able to represent the lines of the sewer on the draw-ing accurately.

“The end client confirmed that the location and line of the sewer supplied was between 125mm and 150mm off the centre point at a depth of 13m to 15m – and as such is over the moon with the application and process of the gyroscopic system. I thank the team at Plowman Craven for the innovation required to adapt and overcome the problems and restraints encountered on site.”
– Jake Boydell, Contracts Manager, IWJS Group

What Did We Do?
With all the safety equipment in place we began work on the 800mm culvert, which was more of an access point than a manhole (there was also a little stream running into it). We took control from the surface and the mouth of the culvert and then recorded the position of the gyro as a secondary measure as far as we could see. We did remote reflectorless shots and the crawler camera pulled the gyro all the way through to the bowling green end – a distance of about 90m. We then winched it back four times to complete the survey.
The 600mm pipe was a straight shaft but a very tight space, so again we had to take control from the surface. We used the plumb level to get the control – or a coordinate – as near to the edge as possible, set the gyro off three or four different times and then processed the data on site.

Despite the many challenges faced we were able to deliver a 2D CAD file to the client, providing clear information on chamber dimensions and the line and depth of the sewers along with topographical levels.

Safety First
Such a challenging site required a number of extra safety precautions to ensure the wellbeing of all those involved on the site.
This included:
■ Bespoke scaffold around entry chamber
■ Davit arm above access point
■ Emergency breathing apparatus
■ Gas monitoring
■ Use of high-risk confined space teams 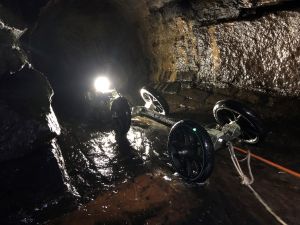