Project Manager Paul Davies aims to challenge stereotypes and broaden perceptions of women in operational positions within the utilities industry.

He said: “When I started in the industry it was unheard of to have a female operative out in the field, but I want this contract to show that there are jobs for women in operational positions if they want them. We want to support people to progress and reach their full potential.” 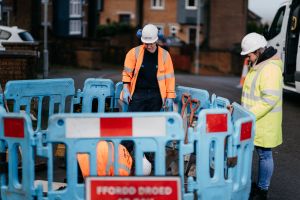 The number of women working in operational roles on the contract has increased over the last five years, going from zero to six – with two thirds sitting in management positions – and as of August 2019, Morrison Utility Services has its first all-female dig team.

Sasha Paget, Team Leader for Metering Operations, began working with MUS almost three years ago, after approaching Paul and asking if there were any opportunities for women available.
Sasha said: “Ever since I was young, I have wanted to get into a trade, like plumbing, but people always told me that I wouldn’t be good at it or that I couldn’t do it because I was a girl. I wanted to push myself to prove that girls can work in external plumbing, just like guys, and I hope I encourage other women to do this job.”
Last year, Sasha approached her best friend of eight years, Shauna Sawyer, to ask if she wanted to join the business as an operative and forming part of its first all-female dig team.

Shauna commented: “Sasha is paving the way; and when you have someone showing you how it’s done and what you can achieve, it’s a lot easier. Eventually I would like to have my own gang and to bring more women into the force, all doing a good job.”
All of the women are working to challenge stereotypes within the industry; it has not been uncommon for customers to be ‘shocked’ when they see a female operative turn up to a job. 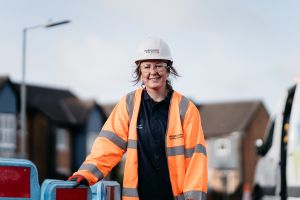 Michelle Cragg, has been working as a Metering Surveyor for three years now, after starting out as a cleaner in the yard.
Michelle said: “Nobody expects to see a female so when I turn up, they are taken aback, but I don’t see myself as different to anyone else here. Women are interested when they see me, I just explain how I got into it and tell them that if they fancy giving it a go, to just do it. It’s changed my life, and I feel like there isn’t anything I can’t take on now.”
Magdalena Munzer-Rabaiotti started out with Morrison Utility Services as a Planner for metering. Around four years ago, feeling restless and wanting more from her career, she was given the opportunity to become the first female supervisor on the contract. 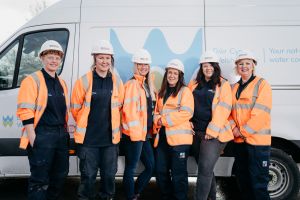 Magdalena explains: “As a Senior Supervisor for metering, I manage all of the supervisors beneath me, as well as five other teams; plumbers, surveyors and dig teams. When I started my role, I had never dug a hole in my life, but I wasn’t afraid to learn or ask questions if I didn’t know the answer. Every day is a new challenge and each site has its own obstacles, so I am always learning, and I have the support to do so and to support my teams.
“We all want everyone to progress and be eager to take the next step in their career. Our industry used to be a male dominated environment, but it’s not anymore. You just need to be a person who wants to learn and, if you do, you will do well.”
Following in Magdalena’s footsteps, Nicola Jenkins moved from the planning office to become a Supervisor for repair and maintenance sub-contractor teams in South Wales.
Nicola said: “I was nervous when I first started. I thought that the guys wouldn’t take me seriously, but I have received nothing but respect since I became a supervisor. We are one big family.
“I am a people person and this job allows me to get out and speak to new people and interact with Dŵr Cymru Welsh Water’s customers. I am much happier now that I am out of the office, I love my job and wouldn’t change it for the world – although I would like Paul’s job one day.”
Supervisor for repair and maintenance in Gwent, Rebecca Bevin, has worked on the contract for five years and has been a supervisor for four years.
Rebecca said: “I am just a person who does a job. It doesn’t matter that I am a woman. We are all the same, and we have to start making people realise that. If there is no one doing the job you want to do, just go and do it. We need to stand out and make the change for the next person who comes along.”

In September 2019, Rebecca started studying for a degree in civil engineering with the Open University. She hopes to progress further within the company and hopes her studies will support taking her career to the next level.
Rebecca added: “There are lots of opportunities at Morrison Utility Services – whether you are older, younger, or have absolutely no experience in the field, there are opportunities for you to grow and develop.”

Colin Jellicoe, M Group Services HR Director, commented: “We recognise that by harnessing diversity and applying the experiences, abilities and unique qualities of all our people, we will enhance our business. We believe in attracting and recruiting a diverse workforce which reflects the communities in which we work and creating an inclusive work culture which will allow everyone to perform to their full potential.”