Lining Division was recently called upon to complete a pipe bursting project that involved the replacement of a 45m long pipe section comprising a 150 mm diameter pitch fibre sewer. The work was carried out as a subcontract to one of Lining Division’s regular clients Cappach Browne Utilities Ltd which was working on behalf of one of the UK’s Water Companies, Southern Water. The 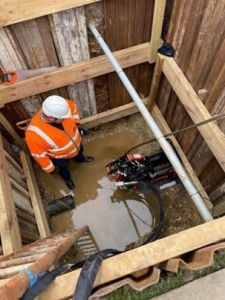 work involved the replacement of a blind connection serving two houses. In this instance the blind connection was a pipe connection that was not accessible as it was buried under a recently laid resin bonded driveway which was not to be disturbed by the works.

The main contractor excavated and supported the reception pit required by Lining Division to complete the new installation, which was completed using the HammerHead PB30 pipe burster. The new pipeline was a 160 mm diameter MDPE pipe which was installed in short sections behind the bursting head of the machine.

To connect the new pipe to the existing drainage system for the two houses, the blind connection was successfully reinstated using a special IMS robotic cutting system to create an opening in the new 160 mm diameter pipe, the location of which had been surveyed in relation to the launch pit prior to the bursting run, into which a ‘Top Hat’ Cured In Place seal was installed.

Commenting on the project Paul Brooker of Lining Division Ltd said: “This method was chosen to avoid costly excavations through the customers’ concrete/resin-bonded driveway that served the two houses involved. The upstream chamber of the drainage system was utilised as a launch pit for the PB30 pipe burster and this allowed us good access to introduce the new pipe system during the bursting process. The full installation was complete in just seven hours. The excavation for the reception pit was filled in the following day to complete the works. This project succeeded efficiently and quickly thanks to the great teamwork and cooperation between all the companies involved, resulting in a better service to our customers.” 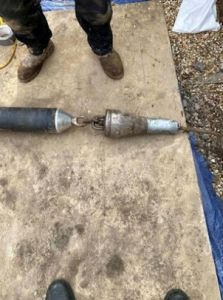 The PB30 unit is a small footprint pipe bursting machine designed mainly for the replacement of sewer laterals. It utilises a cable pulling system as opposed to rods enabling it to operate from either an in-pit launch location or, with the correct pulley system to align the cable through the pipeline, from surface. This capacity enables the unit to be utilised at launch site with smaller access than would normally be required for a pipe bursting system.

The PB30 system is available in two models, the PortaBurst Gen 2 and the PortaBurst Lightening. Both models feature a modular construction to enable simple strip-down and assembly on site with minimal crew. Bursting rates of over 1 m per minute and more are easily achieved, depending on the ground conditions encountered and the original pipe material being replaced.

The units are powered using a dedicated petrol/hydraulic power-pack 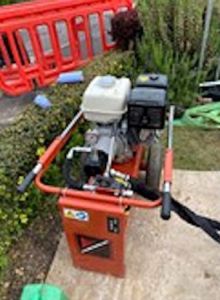 or they can be attached to a standard excavator hydraulic PTO provided it offers suitable pressure and flow.

The PB30 is suitable for pipeline replacement in diameters from 2 in to 6 in (25 mm to 150 mm) on pipeline materials including Clayware, Asbestos Cement, Pitch Fibre and Cast Iron. The bursting units can be used with a range of specialist bursting head tooling including the Hammerhead Quick Grip™ Burst Head as well as the standard Hydroburst tooling range, from HammerHead’s rod based pipe bursting systems.

Concluding his comments in relation to the pitch fibre project Paull Brooker said: “We were very pleased with the performance of the new PB30. It achieved all we could ask for in a short time-frame. The support offered by Mammoth Equipment was also invaluable throughout the procurement and operational processes.”