The Dieppe-Maritime Urban Community has undertaken the rehabilitation of its main concrete stormwater collector dating from the 19th century, and located under the road “Cours de Dakar” behind the habour at a depth of 5m and running along 1km. Indeed, the ovoid network had major structural weaknesses that lead, between 2014 and 2018, three roadway collapses – a roadway on which trucks and cranes weighing 490 tons regularly travel to handle onshore wind turbine blades and heavy equipment at the quay. Between October 2019 and June 2020, the “Cours de Dakar”, main road in the habour, was the scene of extensive renovation works to give the network its full structural capacity back, restore its watertightness, and protect it against abrasion and corrosion. To give a new lease of life to this 1.20 m wide and 2.20 m high structure, the Dieppe-Maritime Urban Community chose a trenchless method: Relining.

This less invasive method allowed the company Sade to install nearly 500 NC pipes measuring 1024 x 1923 mm and 2.50 m long without opening a trench. In addition to enabling the project to be on time, this method makes it possible to reinforce the structure from the inside using GRP pipes and thus limit the inconveniences for local residents. It also monopolised only one part of the road, avoiding closing this very busy road. The NC pipes were inserted one by one into the concrete ovoid network, then transported on a specially manufactured trolley and then joined together to rebuild the inside of the pipeline. The annular gap between the old and new pipes was filled with bentonite grout, forming a complete restructuring composite system.

The other stages of the project:

– The presence of a grey cast iron wastewater conveyance pipe with a 350 mm diameter, supported by concrete sleepers inside the network and over a length of approximately 850 ml. This pipe was removed and a new one created under the Cours de Dakar over a length of 1.350 km.

– The diversion of the rainwaters required extensive preparatory work. The water had to be diverted outside the network to allow the work to be carried out inside.

– Implementation of an anti-flooding pumping station : subject to the tides, the ovoid network is quickly saturated, which causes flooding. The anti-flooding station will therefore be able to handle up to 4,500 m􀆴 of water per hour. 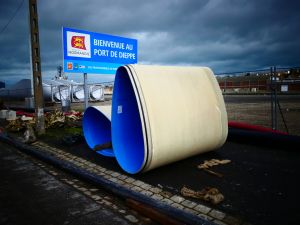 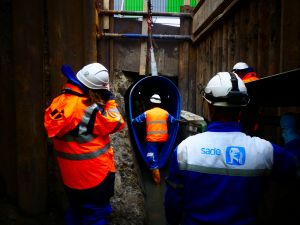 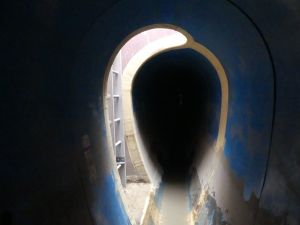 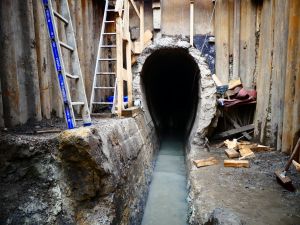