The infrastructure and civil engineering specialist will renovate the inlet, outfall and surge chamber at Dawsmere Pumping Station, a crucial part of the network of flood defences in and around Holbeach.

Dawsmere Pumping Station removes to the sea water collected by the network of local drains and is essential for the protection of the surrounding land and villages which typically lie one metre below high sea level.

An unusual additional operational consideration is that, because the pumping station is located next to RAF Holbeach, the site must undergo “sweep and watch” protocols for unexploded ordnance before and during excavation work.

Keven Stobbs, general manager at Barhale, described the pumping station at Dawsmere as in the front line of defence for the land behind the seawall.

“South Lincolnshire, and specifically the South Holland area, is among some of the lowest-lying inhabited 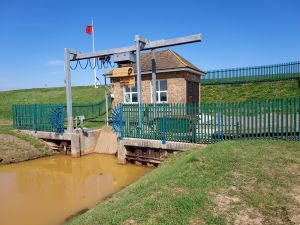 land in the UK,“ he said. “The system of drainage has been successfully developed and managed over centuries but we are more regularly facing extreme weather conditions so the process of maintenance and upgrade is hugely important.

“When carrying out work, we don’t like to take any component out of the system for too long so have been introducing innovative approaches to accelerate delivery. At Dawsmere, we will use a dam formed from one tonne bagged aggregate which can be deployed and removed very quickly.

Barhale regional director James Haddon sees the company’s selection for the South Holland IDB contract as a testament to the company’s expertise and experience across the water sector.

“South Holland IDB is engaged in a long-term project to enhance the resilience of this important agricultural area and we are delighted to have been selected to work with them to deliver their programme.”