Another Successful Grout Filling Project on the A14

As part of the major Highways England scheme to improve the A14 between Cambridge and Huntingdon, Steve Vick International (SVI) were involved in the diversion of a section of intermediate pressure gas mains work undertaken by tRIIO and Morrison Utility Services for Highways and their principle contractors (The A14 integrated delivery team).

SVI Contract Services provided grout filling operations to fill the annular space between the concrete sleeve and the new gas main which ran under the busy dual carriageway at several sites, as well as beneath individual junctions with B roads and tracks.

During the delivery of the diversions the A14 IDT had decided to install several sleeves on the projects to mitigate any possible delays. tRIIO laid the new 8″ Steel IP gas main through the previously installed 450mm concrete sleeves using spacers to suspend the pipe so that when the annulus was grouted the mixture would completely surround the installed steel pipe. It was decided due to the size of the sleeve and the area that needed filling within the sleeves to use a cementitious grout filler rather than foam in order to maintain the pipes strength and structure and prevent the sleeve cracking in the future and thus ensure the integrity of the road surface.

The sleeves ranged from 10m-100m and SVI calculated the grout requirements for each sleeve including the amount of water required.

The SVI Contract Service team arrived the day before 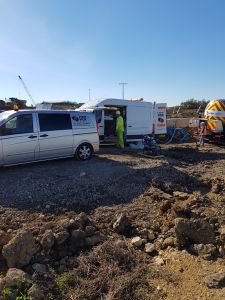 the job to install ENDSEALS™ at either end of the pipe to be filled. The quick cure grout was mixed on site in a purpose built machine and pumped into the sleeve via a fill tube in the ENDSEALS™. The mix and inject machine can be sited up to 30 metres away depending on site conditions. As the grout is gravity fed, rather than pumped under pressure, this helps safety compliance as there are no issues with pressurisation. Filling the 100 metres of concrete sleeving took around three hours. Although the technique is quite labour intensive the cost benefits over the traditional methods are quite significant.

Steve Clarke from tRIIO commented: “The Steve Vick International team were extremely knowledgeable and provided us with a competitive quote which offered good value for money. SVI operatives and plant attended site on various occasions to complete the grouting. The work they carried out was done in a professional manner and to a high standard.”

With large quantities of water being required to mix the grout, SVI use tankers which hold 20,000 litres and, if necessary, transport water to the fill site in bowsers.

“Having a supply of water, and a diesel-powered rig means that we are self-sufficient on site”, says Mike Hall, SVI’s Contract Development Manager. “And because the mix and inject rig is compact enough to be operated from the back of our vehicles, we are able to continue working even when it rains”, he adds.

Steve Clarke of Morrison Utility Services comments, “We were delighted with the work Steve Vick International carried out for us on this project. The gravity fed grout offered a

safe and cost-effective solution to filling the annular space and will prevent the sleeve cracking in the future.”

SVI also carried out several void filling projects for K&S Pipe Contractors and Terra Firma Pipeline Ltd as part of the A14 scheme.

SVI have a rich history of working on a variety of grouting projects for different industries. SVI have used grout to fill old fuel lines on the air side of Heathrow Airport where the airplanes taxi and have also completed a number of railway projects such as the A2 railway crossing in Dartford where grout was used to fill the annular space in a 120 metre long length of pipe.

The A14 improvement scheme, which involves 21 miles of roads, is due for completion in 2020.