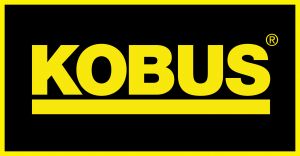 The only pipe pulling machinery of its kind in the industry

The Kobus Pipe Puller is a one of a kind piece of equipment within the industry. The KPP 300 and 400 both offer a trenchless way of pipe replacement that you cannot find elsewhere. The Kobus Pipe Puller works by pulling the old, decommissioned pipe out and replacing them with a new pipe in one single action. This in turn makes replacement easier and faster while reducing the risk of utility strikes and minimising local disruption. 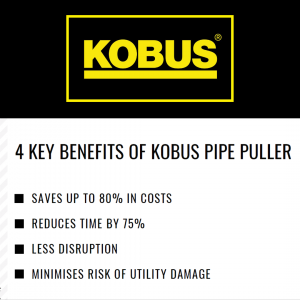 instead aims to keep excavations as small as possible in order to keep costs down, and make the project run faster due to the lack of reinstatement needed after the pipe replacement.

The Kobus’ method of pulling the pipe with a hydraulic winch and a special steel pulling cable, and then replacing the old pipe at the same time as a new PE pipe is towed into place along the same bore path which is created by the extracted old pipe, makes sure there is no possible way for each pipe to accidentally touch which in other older methods could cause a utility strike resulting In explosions and other incidents. 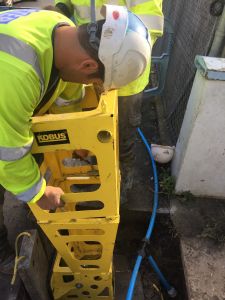 Keeping costs down is what Kobus does best. Due to the quick and fast pipe replacement Kobus offers it means a project can take half the time, which then means half the money and labour costs, not to mention the lack of reinstatement costs due to the small excavations accustomed.

Keeps customer disruption to a minimum

When using old methods of pipe replacement, such as moling it requires a much larger scale excavation, this in itself can become very disruptive for homeowners and the public. By digging up the surface to this magnitude it will therefore cost more and take more time to reinstate to its original state, meaning longer projects and longer chance of disruption.