20 years of service and still enjoying the drainage challenge

“I never want to leave a site thinking another team could come in here and do what I couldn’t.”

Ray Hipkiss is determined that no stone will be left unturned, no manhole unlifted, to get the job done.

It’s a determination not based on bravado, but on more than 20 years of service at Lanes Group plc.
Ray joined the Lanes Chester depot in November 1999 and has gone on to become one of the company’s most experienced and accomplished jet vac tanker operators.
In over 22 years working for Lanes he has carried out almost every drainage job there is to do and visited all kinds of sites. But, he is adamant that he is still learning.
“With drainage work, you still regularly turn up at a job and find new things that keep you on your toes, or you’ve never seen before,” he says. “That’s what makes working at Lanes so interesting.”
Ray had been just 20 years old and working as a warehouse operative when he joined Lanes as an assistant jet vac tanker operative.
Little more than three years later, Lanes paid for Ray’s HGV training and gave him his own jet vac tanker.
He has been winning plaudits from the company’s clients ever since. Whatever the job, Ray always wants to give it his best.
That could be carrying out a site drainage clean on a car dealership forecourt. Or it could be getting pretty mucky digging sand and oil out of a production pit at a factory.
“Working in drainage, you can’t avoid having to get stuck in to some challenging tasks when the occasion arises,” 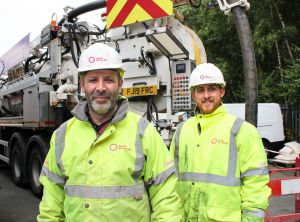 says Ray.
“I’ve also always enjoyed the confined space working element of our job, where we have to enter tanks or large chambers to clean them out.
“That’s where all the health and safety procedures Lanes has developed, including using breathing apparatus if necessary, become so important.
“But the idea that it’s all poo and pongs is just wrong. Our work is more varied than that, and the smells aren’t as bad as people might thing.
“Working at Lanes, we also get all the best equipment and protective clothing we need to do jobs safely and as cleanly as possibly.”
That includes the highly sustainable and high-tech recycler jet vac tanker Ray now operates. It can filter and reuse the wastewater it vacuums up.
This means it can stay on site working for longer, increasing productivity by over 60%, while using less water and generating a smaller carbon footprint.
Being able to deploy ever more capable technology is one of the big changes Ray has witnesses in his two decades of service at Lanes.
“We know we can call on colleagues and divisions with other capabilities if they’re needed,” says Ray.
“That could mean operating smaller jet vac tankers in tighter spaces, or even more powerful machines, like DISAB wet and dry ‘super sucker’ tankers.
“We also regularly work with the Lanes lining division on big rehabilitation projects to renew sewers and industrial pipe systems.”
Ray also enjoys passing on his experience and skills to new colleagues, like his current jet vac assistant, Robbie Williams.
Three years into working life at Lanes, Robbie knows he is learning from one of the best. “Working with people like Ray is so valuable,” says Robbie.
“It means we can achieve a lot as a team, and it makes coming to work really enjoyable knowing you’re doing the best job possible.”